Michael Anderson Receives the Award of Merit from ASTM 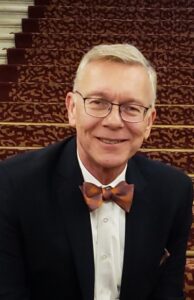 Michael Anderson, Area Manager of Latin America for Falex Corporation, has been presented with the Award of Merit as well as given title of Fellow for his contributions to committee D02 Petroleum Products, Liquid Fuels and Lubricants.

Michael joined ASTM International in 1982. He is also a member of ASTM committees C28 Advanced Ceramics, F34 Rolling Element Bearings and G02 Wear and Erosion. He has received the award of appreciation(1994), and the award of excellence (2002, 2004). Michael is also the former national president of STLE (2018-2019), one of the first recipients of the STLE CLS certification, and has received the Hodson award (2000) and Manteuffel award (2004) from his local Chicago section. Michael has been a dedicated volunteer for over 40 years and enjoys mentoring his coworkers, encouraging their participation in professional societies. He is an outspoken advocate for the lubricants industry with his famous catch phrase “Tribology is everywhere.”

Falex Corporation would like to congratulate Michael on his ongoing contributions to the lubricants industry.