This CEO of Falex Tribology discusses his career in engineering and research and how he got into tribology.

Dirk Drees – The Quick File
STLE member Dirk Drees graduated as a materials engineer and received his doctorate degree in 1997 from the Materials Engineering Department at the Catholic University of Leuven on tribocorrosion of thin coatings. From 1997 to 1999, he worked in a freelance role for the international branch of Falex Corp., then located in the UK, under the mentorship of John Williams. From 2000, he has been leading Falex Tribology in Belgium, first as manager, then as CEO. He built up the testing and support activities in Europe. Falex Tribology is an internationally recognized tribological consulting and testing facility for industry and research centers.

Drees has managed eight European and four national-funded innovation projects in the fields of advanced materials, processing and nanotechnologies, always with an emphasis on the introduction of new materials and technologies in industry. He is author or co-author of more than 30 scientific publications, and author or co-author of four test book chapters on tribology. 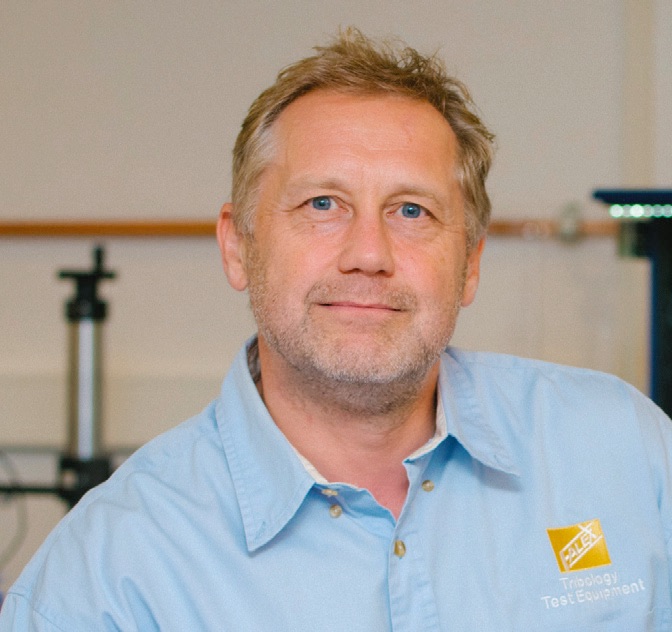 TLT: What got you into the world of tribology?
Drees: As with many of us, I stumbled into the tribology world almost by accident. I graduated as a materials engineer from the University of Leuven in Belgium, and got the opportunity to temporarily replace a researcher who was working on the wear and friction of vacuum-deposited titanium nitride coatings. This researcher was doing his military service, so, in a sense, the Belgian Army was the catalyst. I had done my master’s thesis on surface analyses techniques, so the jump didn’t seem so big. But I had to learn a lot about friction and wear in those first couple of months, when I got thrown into someone else’s research project. After completing my own military service one year later, I was offered an opportunity to start a doctorate in the same group of surface engineering at the University of Leuven, under the guidance of professor Jean-Pierre Celis.

He was not happy with the complexity of tribology and decided to add corrosion mechanisms to the mix, so the challenge of my doctorate was to develop a testing method and to design/build/program a tribocorrosion test machine. So, besides trying to understand the interaction of electrochemical and mechanical/tribochemical processes on surfaces like TiN, CrN and AlCN, I also learned how to build a mechanically sound tribometer working in an electrochemical environment.

It was a very challenging doctorate because I had to make tools for my research myself, and this didn’t always go to plan or fast enough. But it did prepare me for the “real world” where things rarely go according to plans, schedules and budgets.

TLT: What do you do in this big world of tribology?
Drees: Tribology is indeed a big world, and as we like to call it, “multidisciplinary.” It may cover many scales of forces: teratribology of earthquakes, friction and wear in huge machines (earthmovers, airplanes, ships, wind turbines), in smaller components (engines, gears, bearings, seals) down to micromachines (MEMS and the like). But it also covers many environments from harsh outdoors abrasive conditions, the vacuum of space or the inside of humans (implants, stents, medical instruments), or it lives on interaction planes like haptics. Industry and research dealing with tribology may be focusing on the control of tribology by lubricants or coatings but also includes those who develop new materials with improved wear resistance (brakes, polymers, ceramics, coatings, alloys) and those who aim to understand it on a more fundamental level (academic, nanotribology, modeling efforts). This big wide world is very diverse and with very different fields of specialism.

And what is our tiny little role in all this? I recently attended a talk by STLE member Joe Kaperick who used a nice analogy. The overall world of tribology makes a footprint on the industry, and the many small ways individual companies can contribute in this, he called “fingerprints.” I liked that analogy and would also call our work “fingerprints” in the global solution of tribological issues to improve comfort, safety and well-being and save the planet. That sounds very idealistic, but the reality is that we all must work on improvements every day and on every possible aspect, even if they’re small.

Concretely, I work for the Falex Corp., an engineering and research company in tribology based near Chicago and building tribology testing instruments since the 1930s. Falex set up a European technical support facility in Belgium in 1999 to have local sales and technical support for their equipment in Europe, as well as a demonstration lab for their test instruments. They populated this lab with seven of their machines, giving me the opportunity to work with those machines.

I try to bring tribological issues in industry or in humans to a controlled laboratory environment. By first understanding the issue, then finding a controlled testing method on the lab scale that replicates it, we can provide information and hard data. Understanding how to use the measurement data, a critical evaluation of statistics and significance, helps to feed back useful information to the industrial problem, and, in the end, we hope to help solve the problem. This can happen in different ways: comparing materials or lubricants objectively with one another to select the best one or simulating a field component on the lab scale to understand the wear mechanism.

The variety of tribological problems we get to study is enormous—it spans from things like chocolate or coffee abrasion in processing machines, the wear of brick-making machines, the slipperiness or stickiness of plastic bottles on conveyor systems, the resistance of needles and sutures through human skin, the gearing of a Swiss watch, the wiping of car windscreens, the durability of new bearing and gear concepts in wind turbines, the durability of new greases for e-vehicles, the friction control of composite materials for trains, railroad brakes and wheels, lightweight components in automotive, sliding systems in the wings of airplanes, and the list goes on.

TLT: What do you like about your job?
Drees: First and foremost, the variety and diversity of the problems I get to dive into. Often, we feel like a sort of “tribodoctor” because when facing a new problem, we follow the pattern of a doctor examining a patient: first we ask a lot of questions, we try to understand what goes wrong, then we propose some tests to verify the first diagnosis (and adjust it if necessary), and finally we see if we can suggest a treatment. I particularly enjoy the satisfaction when we can objectively demonstrate what solution would be best for a problem. The answer isn’t always clear, there isn’t always a clear winner when comparing solutions, and sometimes two or three possibilities are statistically equal. But sometimes you have a clear answer, and those are the nicest projects of course.

Secondly, working with a small but dedicated team is a wonderful experience. If all your coworkers have the same passion and interests, it just doesn’t get better. And also it is very satisfactory to realize that our small “fingerprints” contribute to the Green Deal and to the United Nations (UN) Sustainable Goals making our world better for everyone. Finally, what’s also great in my job is having the authority in a small company to decide, whenever there are time and resources available, how to use them so we can make new methods or equipment that are industrially of interest. I also get to decide how to use our resources to develop our company and our know-how. And those decisions can be implemented quickly. So, variation and empowerment—wouldn’t you kill for a job like that?

TLT: How have you seen the world and tribology change since you started?
Drees: When I started in 1992, the first computers entered universities, and this “world wide web” was still very new. Dr. Google didn’t exist. I spent many hours in the university libraries, digging through technical journals, having to request copies from other libraries, which sometimes took weeks. Although computers were around to control and run tests, data acquisition was still something new. The “Googlization” is certainly a major change. If it’s not on Google, it doesn’t exist. For that reason, very early on, we made a company website to be found. The internet has its positive and its negatives, of course. During the beginning of the COVID-19 pandemic, having an interconnected world and access to each other through the internet was a great help to keep on working. But the idea that everything is on Google, and the overall challenge of education in tribology, also has made it harder for people to understand what it takes to perform physical tests.

I don’t think tribology itself has changed fundamentally—we are still rubbing two pieces of material together and trying to find out how that can happen most efficiently. Better data acquisition and better digital control of test machines has made the quality of test results a bit better and improved our testing efficiency. We can generate more data and analyze them more efficiently. But setting up a test, running it, replacing test pieces—it’s still a lot of manual labor. And deciding what kind of test makes sense for any given problem still requires insights and know-how that you can’t easily Google.

Products have become better by incremental improvements, not by revolutions. One big change I have seen is that government funding, as well as research in larger companies related to tribology, has declined—although the importance of tribology during design and production has only increased. The terms sustainability and energy efficiency have replaced wear and friction, so maybe it’s time to rename our field of science and technology? After The Jost Report of 1966, perhaps it’s time for a new report that coins new, more government fundable terms, like “sustainabology?”

You can reach Dirk Drees at ddrees@falex.eu.

Falex Corporation was founded in 1927 and provides high quality testing equipment and services for the evaluation of the physical properties of fuels, lubricants and materials. Falex test equipment provides the gold standard for meeting ASTM and other requirements in industrial and military product development laboratories. For more information on Falex and its products, visit www.falex.com or call 630.556.3669.